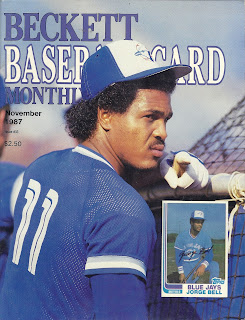 I have stacks and stacks of old Becketts.  Every now and then, I like to grab one off the shelf to see what was going on back in the day.  Here are a few interesting tidbits from November 1987:
READERS WRITE:
I'm pretty sure this guy's head exploded in the mid-90s:  "It seems to me that there are too many sets available for purchase.  It is very confusing to go to shows and be bombarded with the major sets and the minor ones (such as all the little 44-card Fleer boxed sets), too."
I love this one: "What is a mint card with one or two creases worth?"

And this one: "﻿The prices you (Beckett) are establishing in your magazine are ludicrous....Lower, or at least stop raising your prices."

This poor guy had about one more good year of collecting left:  "I refuse to pay more than 40 cents retail for a wax pack of current year's cards.  Fleer and Donruss are stupid to limit their print runs.  They should be printed in sufficient quantities so that the average collector can afford them."

Email ThisBlogThis!Share to TwitterShare to FacebookShare to Pinterest
Labels: Back In The Day 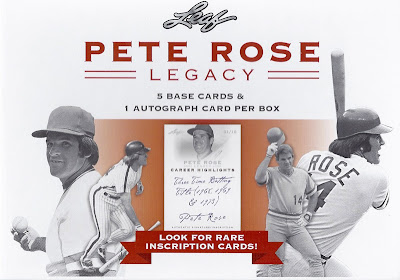 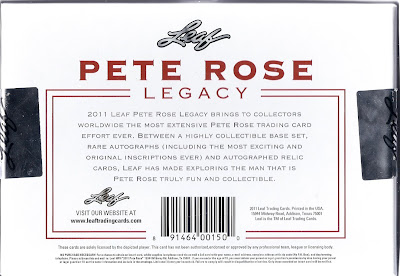 I'm not a case-breaking kind of guy, but I couldn't resist this one, being a Pete Rose fan since age 4.  I justified it by calling it an early birthday and christmas present combined.  Each box has 5 base cards and 1 autograph. Here's what I got:

Four base autographs each numbered to 30.  These are the worst you can get, and as far as just liking the looks of the card, I think these are my favorite. 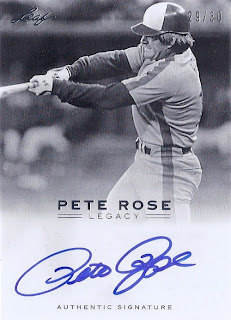 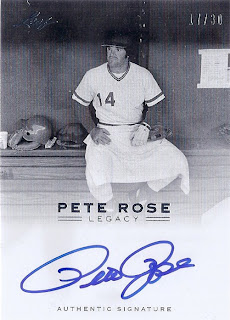 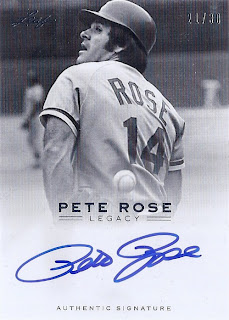 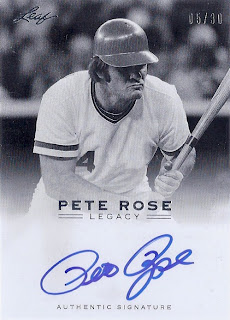 An inscribed autograph (numbered to 10): 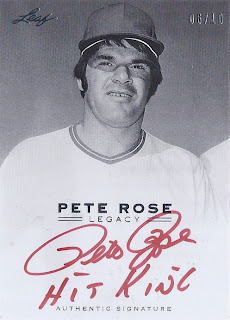 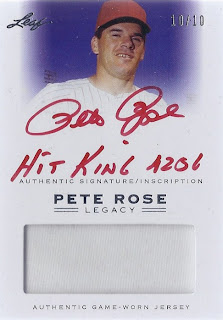 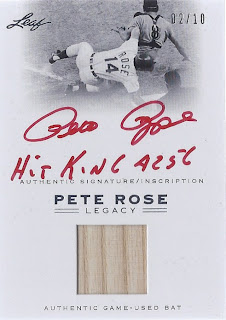 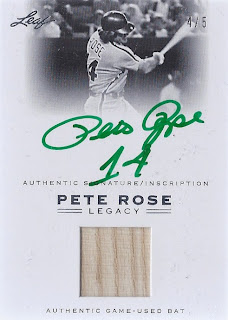 ﻿One "Rose-ism", numbered to 10.  A paraphrase of  his quote, "Somebody's gotta win and somebody's gotta lose, and I believe in letting the other guy lose" 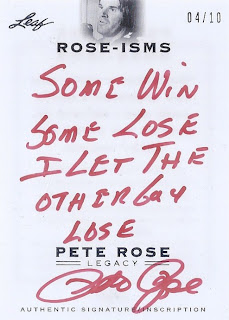 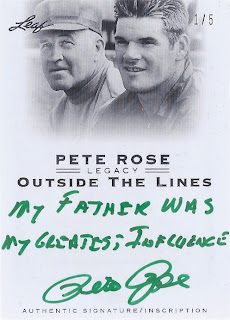 One from the "Career Highlights" subset.  This one highlights the Lou Gehrig Memorial Award he won in 1969 (numbered to 10). 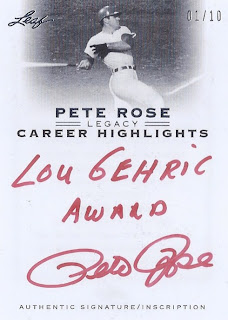 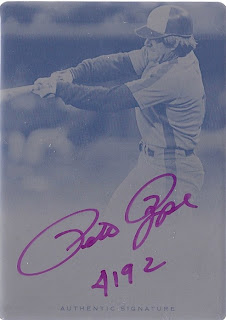 And one unsigned priting plate (1/1).  I got this one as an extra card in a box along with the 5 base cards and the autograph: 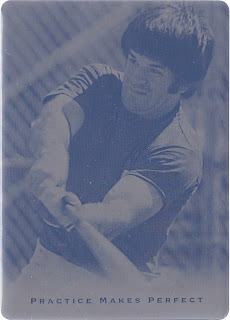 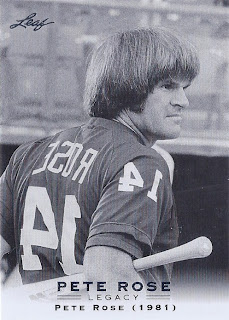 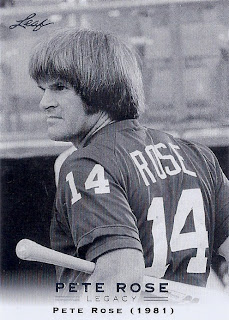 The base set is 60 cards.  I received 59/60 in the case (no duplicates).  The reverse negative short print was inserted in place of what I would assume was the last card I needed for the set.

All in all, I'm extrememly happy with the case.  If I had the money to blow, I would probably get another one.
Posted by Quarry at 9:46 AM 1 comment:

Why I Got Back Into Collecting

Why did I get back into collecting?
I can honestly say that dayf over at Cardboard Junkie was largely responsible.  I was cleaning out my storage room and came across all my cards from when I was growing up (I started collecting in 1981 when I was 4 years old and stopped in 1992).  Later that night, I decided to do some searching on the web and see what was going on in the collecting world these days.  I stumbled across Cardboard Junkie’s video break of 2009 Obak.  I watched from beginning to end and decided that I needed a box.  I ordered a box of Obak and a box of National Chicle, which was the newest release at the time.  Here’s what I got:

Lucky: Yes.  Hooked: Absolutely!
I was actually most excited about the Dale Murphy.  Besides Pete Rose, he was my favorite player growing up.
After that, I went nuts buying old sets from my childhood and started easing my way into the stuff I missed out on from 1993 to present.
So, let me begin by offering much thanks to dayf for getting me back into a hobby that meant the world to me growing up!
Posted by Quarry at 6:42 PM 1 comment: